How many truffle yarns can you tell in Canberra? Well, we’re in the midst of truffle season, so I think at least two. The first one from April 2014 is still online. But @RoseGWhite asked for a unique combination. This story hopefully contains some other things she also loves: 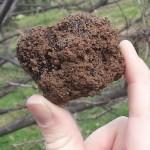 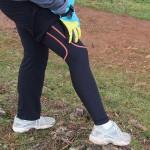 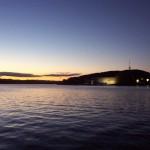 Emily walked into the bar with trepidation. It felt exactly the way she thought it would from first impressions outside. The walls were wood panelled and adorned with a range of framed sporting posters; any remaining space was filled with large screen televisions; and the floor was sticky, causing her shoes to make a disconcerting gooey sound with each step.

‘Do all traditional Irish pubs come with the same sticky wooden floorboards?’ she asked, looking down at her shoes.

Phillip smiled grimly back to her.

‘I didn’t even know there was an Irish pub in Tuggeranong,’ he replied, scanning the room.

Before them was an oblong bar, around which was wrapped a room in roughly the same shape. A variety of seating options were provided in the same circular shape throughout the room; bar stools stood immediately around the bar, and then taller tables and stools, and finally cubicles around the outside windows.

‘Look Phil, Dante’s first three circles of hell. Shall we take one of the outer cubicles; I believe that was the part of hell reserved for the purveyors of deep fried food?’

‘Are we sure this is the place?’ he replied.

‘PJs in Tuggeranong is what the guy said. At least the pub is real, even if his story or the man himself isn’t,’ Emily replied.

Phil again looked around the small venue. The man they were meeting said he would be wearing an ACT Brumbies blue hat, and had advised them to do the same, which they had obliged. Spending so much of their working day wearing team merchandise meant generally both preferred not to wear the team’s colours after hours, but it was an easy enough exception to make tonight. Still, no one appeared to be paying attention to them and he couldn’t identify any other Brumbies caps. He could see a larger man in his forties seated the bar wearing a white Canberra Raiders tank top, revealing a goodish tuft of shoulder and back hair around its edges; and a young blonde woman seated at a cubicle wearing a Brumbies jersey, but that seemed to be the extent of it.

‘Alright, let’s grab a cubicle. Can I get you a drink?’

Emily sat down and Phil joined her shortly afterwards with the drinks.

‘Surprisingly cheap,’ he said, sitting down. ‘And they have my favourite beer on tap.’

Emily looked at him dubiously and sipped her drink. She was about to comment on it, when she became aware of a man approaching their table. He was tall and thin, possibly in his late thirties or early forties, wearing a suit but tieless, with the top three buttons of his business shirt unbuttoned, revealing a tanned, hairless chest.

He was also wearing a blue cap emblazoned with the Brumbies motif. Emily noted that it appeared to be brand new. The man sat down at their table and smiled at them both, in a slightly forced manner, revealing a row of blindingly white teeth.

He looks like the kind of guy that spends his whole day smiling, Emily thought. Like a used car salesman. Is that what he’s selling us today; some used junk he has tarted up to spin on to us?

‘Emily and Phillip I presume,’ he said, shuffling slightly in the cramped cubicle to get comfortable. ‘Sorry I’m late, but I think it’s just gone six. Have you been waiting long?’

Phil picked up the slight inflection in the way the man pronounced ‘six’.

‘Is that a New Zealand accent?’ Phil asked. ‘Strange for a Kiwi to want to meet in an Irish bar, particularly one out here in the ‘burbs.’

‘I am from New Zealand, and I don’t need to tell you how much we love our rugby there. But we also love good beer and food, and this place has both. Us New Zealanders can generally do with a lot of the hipster fads you have here in the centre of Canberra; your lycra-wearing crowd drinking at flashy new bars around Lake Burley Griffin, with their young liberal mates and food bloggers taking selfies. I prefer something a little more grungy; like this place.’

‘My dear Emily, don’t knock it until you’ve tried it. They have a wonderful range of beers on tap; my personal favourite is the Fat Yak Pale Ale, although the Kilkenny is a wonderfully thick and warming influence on a cold night like tonight. And the Guinness pie is the best in the city.’

‘I’m sure it is, but I’m more interested in this tip you’re going to give us for our player’s diets. What exactly are your qualifications?’

‘I’m a microbiologist by training, but I prefer to describe myself as a sports scientist these days. I trust you’ve studied the reports and results I sent you, particularly those involving the Canberra Brave?’

‘They’ve been impressive, although it’s unclear what part your magic formula played in that.’

James leaned back in his chair, and laughed heartily, again revealing his incredibly white teeth.

‘I think you’ll find my formula is entirely responsible for that. I have number of other teams interested, in a range of sports.’

‘That may be the case, but Emily here will do her own independent testing. She has recently been seconded to the team from the university. She’ll run tests in her own lab, with her own mice. We won’t be rushing this product onto our players in light of…recent events.’

‘Of course. But you can’t do any of that unless I tell you my secret, and for that…’

Phil pushed an envelope across the table.

‘There’s your money. So, tell us your secret?’

James leaned in closely and whispered.

‘Shh,’ James said. ‘Keep your voice down unless you want every Super Rugby team in the southern hemisphere to know the secret.’

He leaned back and regained his composure.

‘Local truffles to be exact, from this region. Mixed with just the right amount of dairy and protein. Something about that combination unlocks something in the truffle and the results are incredible.’

He passed a piece of paper across the table.

‘These are my preferred formulas, but you’re open to trying combinations of your own.’

He stood up to leave.

‘You’re not staying for the Guinness pie?’ Emily asked sarcastically.

‘I arrived here an hour ago and was watching you both from down the corridor.’ He gestured towards a narrow exit which led to the toilets. ‘And the pie, as always was delicious.’

Phillip and Emily exchanged confused glances. But before they could ask any more questions, James was turning to go. He paused for only a moment before leaving as though one final thought had occurred to him. However, something about it didn’t ring true to Emily. As though even this last thought was all part of the performance.

‘Oh, and you’re choice about whether you use black or white truffles. I think the black ones give better results, but I’ve had a few issues with umm…side effects. Nothing I’m sure you can’t iron out…’

And with that he was gone. Emily and Phillip would never see him again.

‘I have the results,’ she said, passing a folder across to him.

‘And?’ he said expectantly, meeting her gaze.

‘Incredible. Just incredible. Fifty-five per cent increased stamina and physique in the mice using the white truffle formula compared to the control group; one-hundred and twenty per cent for the black. I’ve never seen anything like it. I’ve spent some of my time in recent weeks perfecting the formula: it seems to work best in a liquid form, comprising equal parts brie cheese, truffle and rare beef.’

‘The only difference I can see between the mice using white and black truffles is that the mice with the black have a darker pigment to their fur. Well, and they seemed to take greater risks. At least, they appeared to start attempting jumps from their wheels. But with their improved physical forms, they could sort of pull it off.’

‘Leaping from their wheels?’

‘Yeah, strangest thing. With toe ropes. Sort of like bungee jumping for mice.’

‘Weird. Well, risk-taking rugby players aren’t necessarily a bad thing. And we’re sure this is legal?’

‘I have found nothing on ASADA or WADA’s guidelines involving truffles. I’ve also done research around the world, and no one has ever had these sorts of results with truffles before. There is something about ACT region truffles, just like James said. Still, I’d like to wait before we start using it on players.’

Phil sat back in his chair.

‘I’m not sure we can wait. The team is performing poorly, crowds are down. My job is on the line. I’m down to my last throw of the dice.’

‘Well, okay. Maybe if we did give it to them prior to the next training session. I can monitor them throughout and we’ll see how Stephen thinks they pull up.’

A week later, rain pouring down over his thick brumbies jacket and beanie, Brumbies Head Coach Stephen Larkham walked off the training ground wearing a broad smile. He walked up to Emily and hugged her, pulling her first towards him for the embrace, and then away from him to meet her eyes.

‘The results of your diet are amazing. I can’t believe truffles would have such an impact! That was the most incredible training session I’ve ever seen. I don’t think there was one dropped ball; the backs completed every set piece we’ve been practicing and invented a couple of new ones; and the forwards broke the scrum machine!’

He lead her into the training sheds, the smile still on his face.

‘That’s great news Stephen, but I’m not sure we can keep up that level of performance,’ Emily said.

‘But why?’ Stephen replied, looking dejected as the smile slowly left his face.

‘We’re right in the middle of the truffle harvest now, so this is the time when they are most bountiful. However, what with the Festival and the amount of food bloggers and restaurants demanding new truffles, it’s hard to source the large amounts we need for the formula. I’ve tried French Black Truffles of Canberra, Terra Petra Truffles, Tarago Truffles, Turalla Truffes, Trufflegate, Blue Frog Truffles  and La Truffiere. We could try the local…’

But before Emily could continue, Phil entered the room panting.

‘We’ve got a problem guys! The players have called an emergency meeting. They’re angry and talking differently!’

‘How do you mean differently?’ Emily asked.

‘I think it’s the truffle mixture. They’re talking about moving to Bondi and a group of them have started performing the haka. Some of them are saying they won’t get out of the change room until we deliver pink lamingtons. And they want beers…but Emily, only in sex packs.’

‘Six packs!’ Emily exclaimed. She paused to consider the ramifications of what Phil had said.

‘Of course! Now what happened to the mice makes sense. And James…his tan, his accent…he knew all along!’

‘The truffles are turning them black from the inside out,’ Phil replied.

‘I think we’re too late…they say they will only play for the All Blacks.’

Thank you Sophia Brady for great truffle shot. You can read more about her truffle adventures at xpatriategames.blogspot.com.au