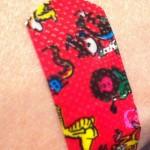 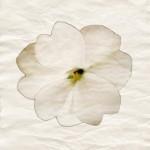 Jacob grabbed his raincoat and ran towards the door.

‘Time to bounce, Grandma,’ he shouted as he reached the back door.

‘Wait Jakey,’ Grandma called. ‘It’s raining and you might slip over. Why don’t we finish making these paper flowers first…’

The call came just too late. Jacob had already reached the door and was on the deck, running to get to the trampoline.

It may have only taken one raindrop, but his foot slipped on the wet deck, and he came crashing down on his knee.

Grandma grimaced and ran out to see him. Jakey was already crying.

Grandma scooped him up in her arms and looked down at his knee. Amazingly there appeared to be no damage.

Grandma looked down at the knee again. There was the slightest hint of a scratch, but no more.

‘I’m not sure a bandaid will help, Darling.’

But Jakey was adamant.

So Grandma took a Wiggles bandaid down from the cupboard and put it on.

‘There she said, all better.’

Jakey smiled and nodded, wiping tears from his eyes.

‘Now,’ continued Grandma. ‘Why don’t we play snakes and ladders? Or finish making these flowers?’

The next day, Jakey still had the bandaid on. And the next. When he came to visit Grandma’s house again three days later, she was shocked to see it still there.

“Jakey, I think we can take the bandaid off now.’

‘No!’ he replied firmly.

‘It’s not good for your skin to leave it on for a long time darling.’

‘No,’ he repeated, even more forcefully. ‘I want to go outside and play.’

Grandma looked out the window. It was raining again. She didn’t want Jakey to get wet, or hurt himself again.

‘I think it’s too wet to go outside, but why don’t I tell you a story, and when I’m finished, we’ll see what the weather is like,’

Jakey looked up at her suspiciously. He wasn’t too sure about her suggestion.

‘Will there be in dragons in it?’ he asked.

‘No, but there will be birds,’ Grandma replied.

‘Alright then,’ he said, smiling. Grandma always told stories about birds. She liked to watch them. She would often go out just to find them and watch them in Canberra with her friends.

‘OK then.’ Grandma paused for a moment.

‘Do you know the lake…Lake Burley Griffin, the big one in the middle of Canberra, with the important buildings around it?’

‘There are a number of islands on the Lake.’

‘Yes, that’s right, very good. Well this story is about one of the other islands on the lake – Spinnaker Island.’

‘Are there birds on that Island?” Jakey asked.

‘Yes, said Grandma. ‘In fact, there are lots of very different birds on that island.’

‘The first birds on that island were the Silver Gulls. They are native to that Island. And they lived there very peacefully for many years.’

‘And then another group of birds came along….let’s call them magpies. And the magpies attacked the gulls and started to take their land.’

‘Well, at first they didn’t know that the silver gulls were using the land. And then, they decided that they could do better things with the land, and needed it more.’

‘Couldn’t they have shared the land?’ Jakey asked.

‘Well, after many years of arguing and fighting, that is what they agreed to do. By then there weren’t that many silver gulls left. And then other birds started arriving on the island, and other animals too. Some came on human boats.’

‘And the head magpies said, “We can’t have these animals on our island!”

‘But the silver gulls were confused. “Why not?” they asked. “There is plenty of room for us.”

‘“No!” said the magpies. “They might threaten the way we our living. They might take our food and our shelter. We can accept some animals, but not all of them. Those that are coming on the human boats are getting here too quickly. They should be waiting their turn. There is something wrong with them, we should not let them in.”’

‘And so the gulls and the magpies worked together to stop the other birds and animals coming to their island if they came by human boat. The gulls were right, there was plenty of food to go around. But as soon as one of the human boats would arrive with birds and other animals on it, the magpies would swoop them, and scare them, and frighten them, so they had to stay on the boat and return to the shore.’

‘That’s so unfair!’ said Jakey. Grandma noticed his pupils were nearly completely dilated, and he was staring up at her in both wonder and frustration.

‘That’s true, and the gulls, and some of the magpies started to wonder if the new animals couldn’t help them with their chores.’

‘But the head magpies kept telling them the same thing: “Those animals that are coming on the human boats are getting here too quickly. They should be waiting their turn. They are bad for this island. They will do bad things.”’

‘The magpies would give this message in a high pitch squawk, which had first made the gulls wince in pain; and for a time, they started to associate this painful feeling with the birds that were coming by boat. And they did believe for a time that they looked and acted differently to the birds already on Spinnaker Island.’

‘But after a time, more and more gulls and magpies became suspicious. Then, one day, a group of gulls and magpies decided to help some of the other birds and animals get to shore so they could meet them. As usual, when a human boat arrived, the bigger magpies scared the boat animals so they stayed on board. But some of the smaller magpies and gulls flew with them, and whispered to the boat animals that if they hid underwater nearby, they would help them come to shore when night fell.’

‘After a time, the human boats left, and the big magpies fell asleep. The smaller magpies and gulls then kept their promise, and helped the boat animals come ashore. To their surprise, when they saw them up close, they discovered they looked just like ordinary animals. Some of them were magpies and gulls just like them.’

‘“Why have you come here?” they asked the new animals.’

‘“Because there is no food or shelter from the shore that we left,” they explained.’

‘“You will have to work for your food if you want to stay,” warned the Spinnaker Island birds.

“We are happy to,” the shore animals replied. “There is nothing left for us on shore. We want to stay and help you make this Island better.’

‘The new animals kept their word. They did help the Spinnaker Island birds make the Island even better, helping out with chores and sharing food. For a time, they did this secretly, but the good Spinnaker Island birds continued to help boat animals come ashore. And slowly, every bird on the Island got to know the new arrivals, and they realised they were good animals, that had left the shore in search of a new better life on the Island.’

‘And together, they helped make Spinnaker Island the best Island it could be.’

‘Yay!’ Jakey shouted. ‘That was a great story! But I didn’t like those big magpies.’

‘No, neither did I,’ said Grandma. ‘Sometimes the birds that are the biggest, or shout the loudest, aren’t always right.’

As his hand touched it, he looked down surprised. The bandaid was gone.

‘Where is it?’ he asked looking at her surprised.

‘Must have fallen off during the story, but you’re knee looks all better.’

Jacob looked down again. Yes, his knee did appear all healed.

He smiled at Grandma.

‘Time to play then.’

He grabbed his jacket and again headed for the backdoor. Grandma was worried about him slipping on the deck again.

But Jacob had learnt his lesson. As he approached the door, he slowed down, and abruptly turned around, just before Grandma stuffed the bandaid into her pocket.

He came back and sat down next to her at the table.

‘You know what, Grandma, I think I’d prefer to make paper flowers with you.’

2 thoughts on “Paper Flowers (with audio)”