This yarn request via Facebook really demanded an ANZAC theme:

The Menin Gate at Midnight + Alexander Bunyip + A Trilby Hat 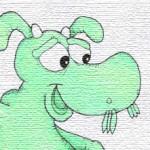 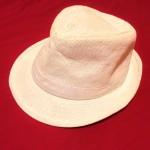 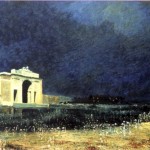 Brian stared down at his great grandfather’s trilby hat, running his fingers around the dark felt rim.

‘It’s okay if he takes it. He’s a good boy,’ Judy said gently from across the room, pausing her ironing to look over at her husband.

Brian sighed and nodded. Billy was a good boy. But this hat meant so much to the Allen family.

‘I know. Just, if something was to happen to this hat…’ Brian drifted away, once again lost in his thoughts; thoughts of loss and grief, so many years ago.

Judy walked over and sat next to him on the edge of the bed.

‘It will be okay, it means something to him too. At least, it would, if you told him why.’

This time Brian sighed without nodding. He wasn’t sure if he agreed. He was so young. Before they could talk more, Billy came bounding into the room.

Brian glanced at Judy before looking back towards Billy.

‘Maybe,’ he said, putting his arm around the child and drawing him closer. ‘I was just chatting to Grandma about it. You’re ten years old now. Old enough to hear a story Grandad needs to tell. It’s the story of our family; at least, the males in it. It’s the story of your great grandfather, William.’

‘Is this story like the Bunyip who ate Canberra?’

‘No, not really. But this is a different type of story. I think I have to take you out for this one. Let the story tell itself. I’ll check with your mum and dad if we can go tomorrow.’

The next day, Brian arrived early to collect Billy from his parents’ house in Turner.

Robert, Billy’s father, was waiting as Brian walked up the stairs towards their front door.

‘What have you got in store for him Dad? Same thing you did for me at his age?’ he asked.

Billy was not yet in sight.

‘Yeah, something similar. Maybe he’ll get the answer right,’ Brian grinned, nudging his son in the ribs.

‘He’s only ten years old, Dad. Scaring the hell out of him is not going to teach him anything.’

‘It taught you plenty,’ Brian replied, meeting his son’s eyes and serious look.

He looked at his father for a moment longer, before turning his head inside.

A moment later, Billy appeared, a big grin on his face.

‘Take care of him, Dad,’ Robert called as the two disappeared quickly down the stairs.

‘Where are we first going on our story trip Grandad?’ Billy asked when they hopped into the car.

‘You’ll find out soon enough,’ Brian replied, smiling down at his grandson. ‘At the end of the trip, I want you to tell me what today is about. And then we’ll see about you taking that hat to school, okay?’

‘Got it,’ Billy replied enthusiastically.

Shortly afterwards, Grandad stopped the car outside a small building.

‘What does it look like?’ Grandad asked gently, getting out of the car.

Billy followed him and stood quietly looking at the structure before him.

‘Yeah,’ Billy said hesitantly. ‘I know there were two big wars…’ he trailed off before stopping.

Brian put his arm around him.

‘There is no shame in telling someone you don’t know something, Billy. A prisoner of war is someone who has been captured by the enemy and held captive. Such prisoners are often treated quite badly, and some even die while held prisoner. Many Australians were held prisoners during the Second World War in Singapore, and some of them built this Chapel.’

‘Can I look more closely?’ he asked.

‘Yes, you can,’ Brian answered softly.

Billy walked underneath the wooden roof that provided some shelter to the otherwise open Chapel. Brian had been here many times, but despite that, and the relatively simple nature of the Chapel, he still found it a sombre place.

Billy stood leaning slightly on the green gate in front of the Chapel, before again turning to his Grandad.

‘Okay, I’m ready for the next stop,’ he said quietly. His earlier enthusiasm already seemed to have drained out of him.

‘You sure?’ Brian asked, not knowing exactly what he would do if his Grandson wanted to end things now.

‘Yep, I’m sure,’ he replied. The two quietly made their way back to the car, and Brian drove the short distance to the next stop.

The first stop was a brief one, and they didn’t even get a chance to get out of the car. Brian pulled up in front of a tall metal fence, behind which Billy could barely make out some buildings.

‘We can’t stop here long,’ Brian said. ‘Someone will ask us to move on probably. But this is the Embassy of the United States of America. Do you know what an Embassy is?’

‘It’s like a small part of a country inside another country. So people from that country have somewhere to go.’

‘Yes,’ Brian continued. ‘The people, and Government, of the United States have looked out for Australians for a long time Billy. This place may not look inviting, but they’ve been good to us.’

‘And they made The Simpsons,’ Billy said, smiling.

As they drove, Brian continued his story.

‘I took your father on this story tour once, when he was about your age, you know Billy.’

‘But this next stop wasn’t around when I did that tour,’ Brian replied, bringing the car to stop. Billy followed Brian out of the car.

Brian paused on a grassy knoll between two structures.

‘On our left Billy, is the National Police Memorial.’ Brian gestured towards a triangular shaped structure to their left. ‘It pays tribute to police officers who have been killed on duty or have died as a result of their duties.’

‘And this is the National Workers Memorial. It honours those who have lost their lives at work. The eight stone columns are positioned to reflect the outline of Australia, and the ripples you can see coming out from them is to show the ongoing impact that work-related loss has.’

Again, after some minutes of reflection, the two were again the car. Billy hadn’t wanted to look at the memorials up close, preferring to stare at them from a distance. Brian wondered if this was all too much for him after all. They seemed to be spending more time in the car than looking at the memorials.

He parked the car further up Wendouree Drive and led Billy up a flight of stairs.

‘I know this place,’ Billy said, some of his earlier enthusiasm returning. ‘This is ANZAC Parade. Mum and Dad have taken me here.’

‘Okay, you tell me about this one.’

‘It is a road to commemorate the wars fought by Australians, and our special bond with New Zealanders. ANZAC stands for ‘Australian and New Zealand Army Corps’, which began with war at Gallipoli.’

‘Very good. Did you know the Parade was completed in 1965, in time to coincide with the 50th Anniversary of the ANZAC landing at Gallipoli?’

‘Yep, and there are small memorials along either side, and up the top is the big War Memorial.’

As they entered the War Memorial building, Brian knelt down next to Billy and looked him in the eye.

‘We could spend days, perhaps weeks exploring this place Billy. And I’d like to come back with you another time and do that. Perhaps we could come here for the Dawn Service on ANZAC Day.’

‘That’s when they play the trumpet?’ Billy asked.

‘Well, sort of. It’s a bugle, but yes, they play the Last Post very early in the morning, before the sun has even risen.’

‘But you’ve seen a lot already today, and there is something in particular I want to show you,’ Brian said, taking his grandson’s hand and leading him into a darkened room.

‘This building is one big national memorial to the members of all Australians who have died or participated in the wars of the Commonwealth of Australia. In this room, there is a particular picture I want to show you, that for me, tells that story the best of all the memorials we have seen today.’

The room was very quiet, and Brian felt Billy squeeze his hand a little tighter.

‘This room reminds me of Changi Chapel,’ Billy said.

Brian considered this for a moment.

With his free hand, Brian gestured to a large painting on the wall, lit by spotlights in the otherwise almost completely dark room. The paining depicted a large white gate in the background, with a large field of poppies in the foreground. A dark and foreboding sky completed the deeply sombre nature of the painting.

‘Billy, in many ways, this painting tells the story of our family. Your great great grandfather, William, fought and died near this place. This is the Menin Gate in Belgium, where many battles were fought during the first World War. Many Australians, like your Grandfather, were killed here. This painting, and the memorial it shows, were created to ensure we never forget this.’

‘But we didn’t remember Billy, not well enough. And 20 years later, the world was at war again, and William’s son Patrick was killed in Africa. But he too had a son before he died, and his name was Jack. Jack was my father. Jack fought in a war too, but he survived, and he died just before you were born.

‘Your father and I have been lucky enough not to fight in wars, but that doesn’t mean we should forget the sacrifice these men, and women, made. The choices they made, to fight for what we believe in, meant they didn’t get to see their children grow up; to see their wedding days, or meet their grandchildren. Experiences I and my children have had, perhaps because of the gifts they gave us. Experiences I hope you too have without the awfulness of war.’

Billy stared silently up at the painting for many minutes, still holding Brian’s hand. At last he spoke.

‘I know what today is about Grandad,’ Billy whispered.

‘What’s that Billy?’ Brian said quietly, kneeling down to hear his words.

The boy paused before answering, looking up into his grandfather’s weathered face.

Brian tried to smile, but he was also aware of the small tear slowing down his cheek. He brushed it away.

‘Yes William,’ he said, his voice choked with emotion. ‘That’s just what today was about.’

He took a deep breath before hugging his grandson.

‘You can take the hat to school.’

Billy smiled up at Brian.

‘Thanks, but I don’t think I will. I want you to keep it safe, and when I’m old enough, I’ll take good care of it too.’

The two travelled silently back to Billy’s house. As they again began to walk up the stairs towards Billy’s front door, Brian put his arm around Billy.

‘You did well today son. Shall I read you that Alexander Bunyip book.’

Billy looked up at him.

‘Because I don’t think it should be a story about Canberra. It’s a story about someone coming from outside, not liking this place, and destroying it. Canberra is a wonderful place, and a place where such important buildings have been constructed. I don’t want to read about someone coming in and destroying them for no reason. I want to read about them being celebrated, and cherished and loved.’

‘You’re right Grandad. Tell me that story instead.’

Picture of Menin Gate at Midnight (Will Longstaff) from http://www.awm.gov.au

2 thoughts on “ANZAC Day (with audio)”