This yarn was inspired by two Human Brochure discovery events to Bentspoke Brewing Co and La De Da. For the latter, we were entertained by talented beatboxers, artists, and hiphoppers (is that a word?). I can’t pretend to have any of their talent, but it felt like this yarn had to be told ‘hip hop’ style. As usual, not everything described here may have actually happened, but we defintely had: 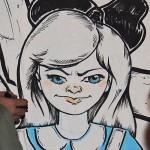 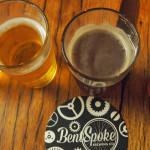 But I’ve got a tale of two bars that’ll getcha.

My tale starts with sweet cider and ale.

But the end has a sting in its tail.

Bar one is new, hipster and cool;

A micro-brewery that is ultra old school.

The spokes are all bent outta shape;

But the owners aren’t…they’re called Dicky and Trace.

Headed there on a cold Tuesday night,

Didn’t drive, so the beers needn’t be light.

Dick and Trace talked us through their beers

Beer one was named after them; fruity and brown.

Beer two cranked the shaft up to loud.

But they sold out before they even got cold.

But I ain’t here to lecture on beers;

This tale is about plaudits and cheers.

Dick’s take away message was clear;

He started cussing and cursin’ all about race

The dude was seriously losing his face.

Dick took him aside for a wee little chat;

Said, ‘To make the perfect beer my cool cat:’

‘You need British Malts, US malts and German ones too.’

‘Put together right, and you get a great stew.’

At last he said, ‘Mate you just gotta see’:

Multiculturalism is the key for the mix.

The dude smiled and nodded; he finally got it.

Two days after that happy night;

Off to Belco for an arty brush fight.

Tunes and painting were the main game.

We heard all sorts of sick music and beatz;

From Jemist, Ender; Toggle and Keegz.

Food was nothing short of delish;

The art battle was a whole lotta fun,

Plan for us to decide which team woulda won.

Cept when the votes were all tallied and done

Scores were level….hell, that’s no fun!

So team one conferred on the spot

And one of their team suddenly yelled out ‘stop!’

‘There is one more vote to be cast.’

And he waved his brush over their art.

The picture had a girl with eyes, blue framed;

But this was a different mirror than that;

Cos we didn’t go in, but she came out stat!

Alice popped right out of the scene.

Most amazin’ thing I ever seen.

She waved and smiled, and super real quick;

Cast the last vote with a nearby blue stick.

I promised a sting in the tale dear friend;

And you’re right, we’ve nearly come to the end.

These were two great nights, that’s for sure.

But I have one final itty fact in store.

If you head down to La De Da one night soon

Keep an eye on the art that I’ve spruiked in this tune.

Cos you’ll see a gap in winning canvas number one;

Where our dear little Alice used to have fun.