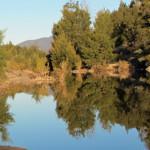 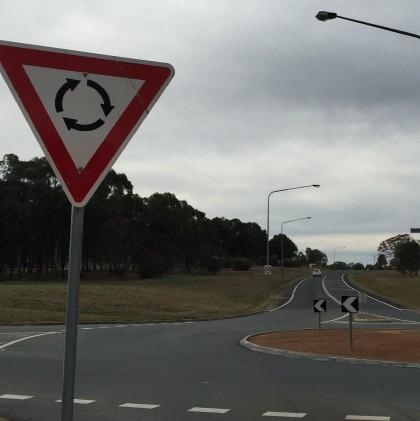 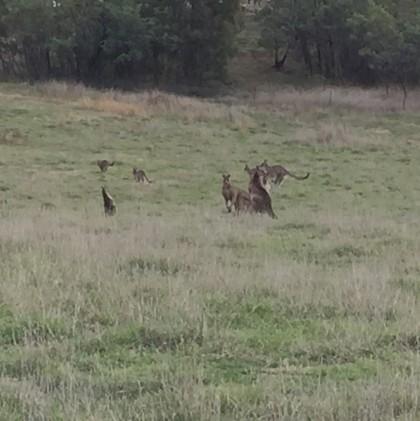 Joey Jumbuck stared out the window, longing to be out exploring the world. To be jumping among the gums, and searching out new watering holes, gum nuts and other experiences.

Joey looked up and realised his teacher, Wilma Wombat, was speaking to him. The whole class had turned to stare at him.

‘Daydreaming again, Joey? I was asking you a question. How do you spell constitution?’

‘Wrong!’ interrupted Wilma. She moved slightly and Joey saw some letters written on the blackboard. ‘If you had been paying attention, you would have seen me writing it on the board earlier. I’m going to have to speak to your parents again Joey. If you want to see the world, as you say, you will need to learn the things I am trying to teach you.’

Joey sighed and put his head down on his paws.

His parents were not happy to hear what Wilma said, and they sent him to his tree with no supper. He lay under the tree, feeling tired and hungry, when Grandad Greyback appeared.

‘Not well Grandad, I got in trouble at school today.’

‘I heard. Staring out the window again, dreaming about seeing the world. I did the same thing when I was your age.’

‘Really?’ He couldn’t imagine Grandad getting in trouble for anything – and he seemed to everything about anything.

‘Yep, didn’t pay attention, wanted to get out of the room and do something more fun.’

‘And you did?’ Joey said. ‘You’ve been everywhere Grandad, and done so many cool things.’

‘Yes, but I was only able to do them once I knew how to, and there are lots of things Wilma Wombat can teach you that you will need.’

Grandad sat down next to Joey.

‘You know, I really only understood how important learning about things were when my Grandmother sat me down, when I was about your age, and told me something really important.’

‘She told me,’ Grandad continued. ‘That a kangaroo that thirsts too much will only even find his or her watering hole in a roundabout sort of way. However, a wise kangaroo is one that…

But Joey wasn’t really listening to the rest of what Grandad said. He had already begun thinking about the first part of what he had said. A watering hole. A roundabout. Being wise.

‘Thanks Grandad!’ he exclaimed.

Later that night, when everyone else was asleep, Joey crept into the bush and bounded away. He figured if he just used his nose to search for water, he would eventually find a watering hole at a roundabout. But after bouncing for many hours, he felt no closer. He had found many roundabouts – there seemed to be one on nearly every street in Canberra – but none of them had water. He was also getting thirsty.

Just as he sat down to rest, an emu came along.

‘Hello little one,’ she said. ‘You look thirsty, and lost.’

‘I am. I’m looking for a roundabout with water in it.’

The emu handed him a water bottle, and considered this.

‘There are many roundabouts around here, but none with a watering hole I think. Sounds like you need a map.’

‘Haven’t you been paying attention in school? A map is a set of drawings and words that shows you where things are. So you know where you’re going. Get yourself one of those.’

With that, she settled her wings and began to rush off into the forest.

‘Try Keith Koala, he often draws maps from high up in his tree,’ she called back, disappearing into the forest.

Joey stood up and looked around. Where would he find Keith Koala?

He began hopping around and calling out.

‘Keith? Keith?’ he called into the trees.

After bouncing around for a few minutes, he felt a gumnut hit him on the head. He looked up in a nearby tree.

‘Keep your voice down, I was trying to sleep!’ a grumpy looking koala called down, still throwing gumnuts at him.

‘I’m looking for a roundabout. With a watering hole….and I need a map to find my way.’

‘I have a map that will help you, here you go.’

He handed Joey a piece of paper with lots of numbers and words on it.

‘Look, these lines here are streets, and they have names. The roundabout you are looking for is over here, near the lake.’

Joey nodded, but he wasn’t sure he understood how knowing where the roundabout was on the paper was going to actually help him find it.

‘But how will I know which direction to go?’

‘We are here, on Mount Ainslie, near the War Memorial, this big building here. These lines and numbers on the bottom of the page tell us that on this map, one centimetre is one kilometre.’

Keith handed him a ruler.

‘So we can measure, that from where we are to the roundabout is two centimetres. So that’s two kilometres. In that direction,’ he said, pointing into the bush.

‘That’s maths. Pay more attention to it in class. Now, I’m going back to bed.’

Keith climbed back into his tree.

Joey hopped off in the direction Keith showed him, glancing at the map as he went. He realised there was a picture of a river that looked like his home. If that was right, he had bounced close to the watering hole roundabout on his way here, but had missed it.

After bouncing for some time, Joey realised he would have no idea how to know when he was close to Constitution Avenue. There were many green signs along his path, but he couldn’t read them.

He decided to stop and rest, fearful that he would again bounce right past the roundabout. Just as he sat down, a bilby emerged from a nearby hole.

They bounded up a human street called Anzac Parade for a few minutes, when Walter stopped at a sign.

‘Here we are – see, this sign says Constitution Avenue.’

Joey looked at the sign, making out the letters.

‘Yep,’ Walter replied. ‘Sounds like you’ve been paying attention in school. What are you doing here?’

‘I need to find a roundabout with a watering hole.’ Joey replied.

‘It’s just over there,’ Walter replied, pointing further up the road. ‘See you later.’

With that, he bounded off.

‘Thanks!’ Joey called, looking up towards the roundabout.

There was indeed a watering hole in the middle of it. However, cars were rushing around it from all directions. How would he ever manage to cross and drink the water? Just as he was giving up all hope of every reaching his goal, he felt a tap on his shoulder.

‘Hello young Joey, I was hoping I would find you here. We have been so worried about you! You have been gone for nearly a day.’

‘Grandad, I have found the watering hole you described. If I drink from it, I will be wise!’

‘You didn’t listen to the end of what my Grandmother told me, Joey. She said:

That a kangaroo that thirsts too much will only even find his or her watering hole in a roundabout sort of way. However, a wise kangaroo is one that learns all he can, so that he knows how to store his water and find more if he needs to quickly.’

‘So I won’t be wise if I drink from this watering hole?’

‘No, but tell me, how did you find your way here?’

‘Well…I must have hopped right past it, because I didn’t have a map, or a ruler, and I couldn’t read the street signs. But now I can do all those things, and they helped me find it. I’m going to pay attention in school from now on, because that’s how I’ll learn to see the world.’

‘Sounds like you found some wisdom after all, Joey.’

Joey looked at the watering hole, and considered this.

‘Why don’t we go home? Think you can show me a shortcut?’ asked Grandad.

Joey smiled and nodded, pulling out his map.

‘I’ll show you Grandad. We are here, and if we can take our ruler and measure to our home, at Sullivan’s Creek – that’s here – that we can see that…..’

Grandad patted him on the back as he continued, proud of what he had learnt.

From that day on, Joey always paid attention in school, which meant he was soon able to see more of the world.

He learnt to spell many words, but he always made sure he knew how to spell Constitution.